Archive of older topics. From 2021 and older. 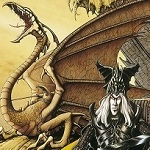 HELLWELL - Beyond The Boundaries Of Sin
SKR057CD
Release Date: September 2012
CD
$12.00
MANILLA ROAD is the most consistent band of all time. They have proven year after year and album after album that they are even more consistent than IRON MAIDEN. Mark Shelton has so much music inside of himself he started a new band called HELLWELL. HELLWELL is basically a MANILLA ROAD sounding album with DEEP PURPLE-esque keyboards and dark and horror lyrical themes. This is album is HEAVY as hell.

I'm not sure how many copies, but there will be copies of this with a 60 page book written by the band and published by the label.


It is with a very heavy heart that we announce the passing of our beloved brother Mark ( The Shark) Shelton, founder and lead guitarist for Manilla Road. Mark passed away suddenly, while at the Headbangers Open Air Festival in Germany. His brothers and band mates are making arrangements to bring Shark's remains home. All money donated will go directly to Mark's Mother Janet Elliot for the hospital and mortuary expenses.
Thank You for all your support and loving facebook messages. Thank you for your generosity and May the Lords of Light be with you!

or you can donate through our paypal account: booking@manillaroad.net